You have probably heard a lot about air pollution recently, be it because of the massive wildfires in California, smog in India or the diesel emission scandal in Germany. So let’s look into air pollution in the Amazon. Most air pollutants are actually aerosols. Identifying these aerosols and their chemical composition can help us understand where they come from and to what extent certain regions are affected by air pollutions. That is exactly what Li Wu and co-authors did in their new study in the Amazon rainforest.

They collected and analyzed aerosols in two locations: the city of Manaus, a large urban area in Brazil, and the ATTO site in the heart of the forest. The samples were collected during the wet season when ATTO is mainly influenced by air masses from the Atlantic and is located upwind from Manaus. And indeed they found that at ATTO the aerosols are mostly of organic origin, emitted by the forest itself. Additionally, they could identify mineral dust and sea-salt particles. In contrast, they frequently found soot, fly ash and particles containing heavy metals in the samples in Manaus. These are most likely produced by human activities. The good news is that such anthropogenic particles are still largely absent from the atmosphere over the rainforest, showing us that pristine wilderness regions do still exist. That is, at least during the wet season when the winds blow in the “right” direction.

The scientists published the study in Atmospheric Chemistry and Physics (ACP) and is available Open Access here.

Aquino et al. published a new study in Agricultural and Forest Meteorology about the characteristics of turbulence within the forest canopy at two Amazonian sites. They found that the air layer close to ground is largly decouples from the air layer in the upper canopy and above. 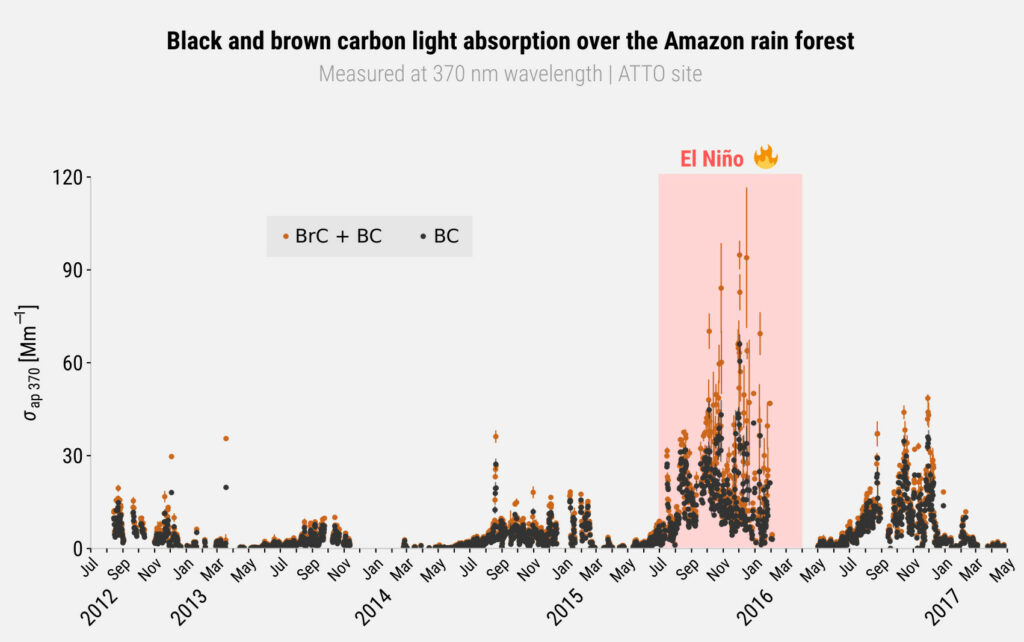 The properties and dynamics of clouds are strongly dependent on the types and amounts of aerosol particles in the atmosphere. They act as so-called cloud condensation nuclei as they initiate the formation of cloud droplets. Therefore, it is crucial to gain a sound understanding of the emission patterns, properties, and seasonal variability of aerosols in relation to the cloud life cycles. In order to achieve this goal, our aerosol group was able to record such data at ATTO. Over the course of a full year, they continuously measured aerosols and their properties in the atmosphere at the 80 m tower. Thus, they created the first such long-term record in the Amazon.

The results of the study were published in two parts; the first was released in 2016 and focused on the parameterization of the aerosol properties. This provides the scientific community with input for models to better predict atmospheric cycling and future climate. Because clouds are such a vital and highly complex component of the climate system, it is important for models to get them “right” in order to make reliable predictions.

In this newly published second part of the study, the authors focused on defining the most distinctive states of aerosol composition and associated cloud formation conditions in the ATTO region. They distinguished between four separate regimes that alternate throughout the year. For example, they discovered that the atmosphere is practically pristine during certain episodes in the wet season (from March to May), with no detectable influence of pollution. However, throughout the rest of the year, “foreign” aerosols arrive at the site in varying amounts. They include natural aerosol particles such as Saharan dust, but also pollutants such as smoke from biomass burning (wildfires and much more often deforestation fires) within the Amazon or even in Africa.

Part 1 and Part 2 of this study were published by first author Mira Pöhlker in Atmospheric Chemistry and Physics (ACP) Issues 16 and 18. They are available Open Access and thus freely available for everyone.

Studying the role of the Amazon in the Earth System from an observatory with a 325m tall tower. RTs, likes & follows are not endorsements. #scicomm

⏰Hybrid Event Alert! 👩‍🏫👨‍💻
On Nov 3rd, during the @BerlinSciWeek the Brazilian Embassy in Berlin @emb_berlim will host an event about ATTO. Our coordinators as well as junior and senior project scientists will talk about the different aspects of our unique research at ATTO.

🌳🌳🌳Are you working on research related to forest-climate interactions? I'm guest editing a Research Topic on this theme for Frontiers in Forests and Global Change and welcome your abstract submissions by 30th November! Happy to answer any Qs.🌳🌳🌳
👉https://t.co/jtLdcKd6bR

Eighty-four percent of all Amazonian arboreal plant individuals are useful to humans
https://t.co/YO5P8wm630

For a new study in @EGU_BioGeo Prass et al. used the FISH method to distinguish bioaerosols down to the domain level in samples from the Amazon rainforest at ATTO.
📄Summary: https://t.co/8gxu385EQ1
🔖 Paper: https://t.co/6PEFj4HaHZ
Figure & photo from Prass et al. (2021).

These are tiny particles filtered from the air at

How do you detect changes in the canopy of the thi

Our researchers and technicians in Germany not onl